Dinner dance to the tune of the “Degenerates” 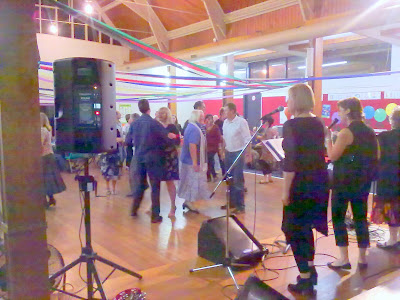 The Malawi Support Group held another Fundraiser last Saturday when we were entertained and danced to the wonderful music of the "The Degenerates" who donated their services for our dinner dance.
The performance of this marvelous band seems to become more polished each year. One of our past members of the Malawi Support group who died several years ago told the story to another good friend about his experience whilst serving in the merchant marine in WW2. Whilst under severe bombardment everyone was feeling frightened and miserable but during a lull the ships loudspeakers broadcast the song ‘White Christmas’. He recalled vividly the immediate calming effect on the entire company. One of the band members who was his good friend had asked me to sing that song at a previous function he attended. We repeated the song again at this function in memory of our good friend as a reminder of the universality of music as a source of warmth and hope for the darkest of times.
For more photos visit the Malawi Blog under blogs of interest.

Who could fail to appreciate the deep rich baritone voice of Brian Stokes Mitchell singing the part of Emile and the immortal words of ‘ Some Enchanted Evening ‘ from that great Broadway show ‘ South Pacific ‘ from the genius of Rodgers & Hammerstein. Occasionally a singer ‘owns’ a song as it seems no one else can bring that unique powerful vocal interpretation into play; but he is even better singing ‘This nearly was mine’ from the same show but there is a block on the encoding.

Standing next to Brian is Reba McIntyre (who was for 4 years in a row Country Music Association's Female Vocalist of the Year and is also a fabulous actress) in Concert from Carnegie Hall. Reba aptly sings the part of Nellie elswhere in the performance. All I can say if you don’t like this version you don’t like ice-cream.

I have sung the song many times but never heard a version as rich as this one. Surprisingly he does not take the top note at the end; possibly to maintain the depth and tessitura (musically the most comfortable range for a given singer) that encapsulates this song so magically within his vocals range.